“Why do you write formal poetry?” I am often asked. The question always puzzles me. Why wouldn’t I write in form? I am a poet, after all. I want to do everything I can to improve my craft. I want to learn from those who came before me, and to carry on poetic tradition. I love playing with, pestering, manipulating, and arranging words on the page. And most of all, I love any literary challenge.
I learn a great deal every time I write a sonnet, a haiku, a ballad, or any other formal poem because when writing in a prescribed pattern, every word counts. Each word must fit inside the poem neatly. If one word needs to be changed, it has a gigantic effect on the whole, which means the poet must constantly weigh every single word on the page. It is an enormous challenge, and enormously satisfying to work this way (plus it’s fun!).
I have found that teen poets often enjoy writing in  form. Adolescence is a time of intense emotion, and writing in form gives that emotion a place to be contained. By concentrating on line breaks, repetition, rhythm, rhyme, and other patterns, the poet gets both farther away from and closer to the raw material of the poem. At least this has been my experience.
One of my favorite forms is the pantoum which consists of four-line stanzas whose entire lines are repeated in a pattern: the second and fourth line of one stanza is repeated as the first and third line of the next stanza. A pantoum can be any number of four-line stanzas. In the very last stanza, the second and fourth lines are taken from the previous stanza, becoming the first and third lines, following the usual pattern. The last stanza’s second and fourth lines are identical to the first and third line of the very first stanza, which means that every line in the poem is used twice. Sometimes the second and fourth lines of the last stanza are inverted, making the last line of the poem identical to the first line of the poem. The repetition of entire lines often evokes a hypnotic, haunting rhythm.
Writing a pantoum isn’t as difficult as it sounds. The easiest way to write a pantoum is to have one beside you, and use it as a pattern.
One of the poems in my forthcoming book, October Mourning; A Song for Matthew Shepard  is a pantoum. On the night of October 6, 1998, Matthew Shepard, a gay, 21-year-old student at the University of Wyoming was lured from a bar by two men who pretended they were gay. Matt was robbed, brutally beaten, tied him to a remote fence, and abandoned. He was discovered 18 hours later and brought to a hospital. He never regained consciousness and died 5 days later with his family by his side. This crime was committed right as Gay Awareness Week was beginning at Matthew Shepard’s school, and I was the scheduled keynote speaker. When I arrived in Laramie, I saw first-hand  what hatred can do to a family, a community, and the world.
When I began writing October Mourning, I knew there was a very good chance that my emotions would get 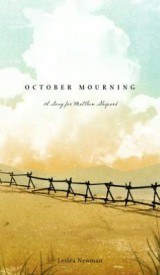 the better of me. I turned in part to formal poetry in order to take a step back from my emotions and to immerse myself in them more fully.
In addition to being a pantoum, the poem that follows is a persona poem, meaning that the speaker of the poem is an inanimate object, in this case the fence that Matt was tied to for those long 18 hours:

(written as a heroic crown of sonnets)

(a novel in verse, written in form)

(Chapter book of formal poems told in the voice of Hachiko, the famous Japanese Akita  who waited ten years at Shibuya Station, hoping for his master’s return

The Matthew Shepard Foundation or go to Matthew’s Place

How to Read a Poem Aloud

Enter your info below if you want to…